The first Square to be laid out was Johnson Square. Johnson Square was planned out in 1733 by General Oglethorpe himself. Only one block away from Bay Street, Johnson Square is one of the most visited Squares in Savannah.

Johnson Square was named after South Carolina’s colonial governor, Robert Johnson. Johnson Square served an important purpose in the colonial times. It was a meeting place for the early residents of Savannah. Meet-ups, church services and community activities took place in Johnson Square.

In Colonial Times, the area around Johnson Square was named Derby Ward. Derby Ward could be thought of as the first neighborhood in Savannah.

In the center of Johnson Square stands the monument/obelisk to General Nathaniel Greene. This Monument was built starting in 1825. The cornerstone was even laid in place by the famous French General Marquis de Lafayette.

Nathaniel Greene was second in charge of the Continental Army to George Washington during the American Revolution. The monument to Nathaniel Green is approximately 50 feet in height. Beneath the monument, Nathaniel Greene is laid to rest with his son by his side. Upon his death, Greene was buried in Colonial Park Cemetery. After some time, the locals in Savannah decided to move his body to Johnson Square. However, they realized that they did not know where his body was. In 1902, his body was found and moved to Johnson Square.

A few years after his death, Nathaniel Greene's son drowned in the Savannah River. He is also buried in Johnson Square next to his father.

This sundial was set in place to honor William Bull so that is what I am calling it. It is on the south side of the Square on a small pedestal. The time is usually fairly accurate.

The sundial was put in place by the Society of Colonial Wars in 1933. It replaced the original sundial that sat in Johnson Square.

So, who was this William Bull guy? He has a street and sun dial named after him, he must have been important, right? Well, actually he is. Colonel William Bull helped General Oglethorpe settle the area that is now Savannah. He even helped Oglethorpe plan the city layout, including Johnson Square. You do all of that, you get a sundial. I think that is how it works. 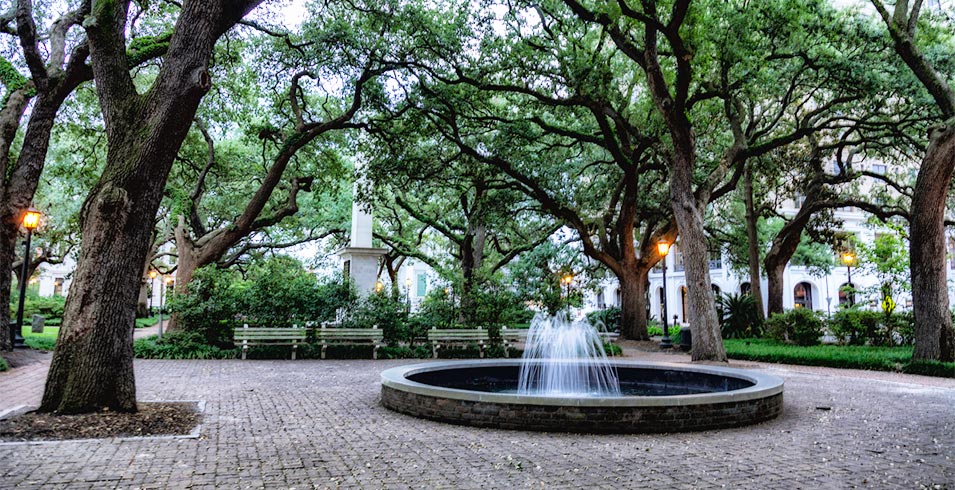 The Fountains in Johnson Square

In Colonial times the residents of Savannah built two large ovens in Johnson Square to facilitate baking. Not everyone in Savannah was able to have their own over so this was a great way for the community to help each other. The fountains were built on the location of these two ovens. Why? I am not sure...but it is an interesting little tid-bit to know.

Where is Johnson Square?