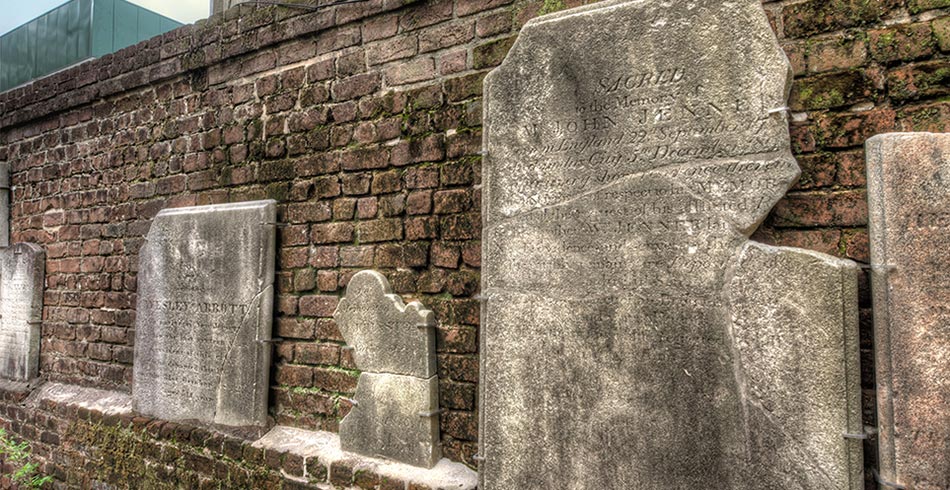 The History of Colonial Park Cemetery

The last burial in Colonial Park took place around 1850. After this time Laurel Grove Cemetery was used as the main Cemetery in Savannah.

A notable burial in Colonial Park Cemetery was Major General Nathanael Greene. Greene was originally laid to rest in Colonial Park Cemetery after his death in 1786. When it was decided to move Greene from the Cemetery to the Greene Monument in Johnson Square there was allegedly confusion as to where his body was actually located. It was found in the Graham family vault. His body is now interred under the Nathanael Greene Monument in Johnson Square.

Savannah has a long and personal relationship with the horrific disease known as Yellow Fever. This disease ravaged the population on many occasions throughout the 1700s and 1800s. One of the worst years was 1820. At the northern end of Colonial Park Cemetery is a mass graves that holds almost 700 bodies of people who died during the Yellow Fever epidemic of 1820. The exact number of people buried in this mass grave is rumored to be 666 people, much to the delight of ghost tour companies.

One rumor which seems to persist is the idea that there are mass graves to the south of Colonial Park Cemetery, in the area now used as a basketball court and playground. Some people say they are yellow fever victims, others say it is a slave burial ground. In 2009 archaeologists surveyed the land in question and found that there were no graves in this area. They used ground penetrating radar to determine if this area just south of the Colonial Park Fence was the place of these rumored burials. They found nothing but a trench that connected two Redoubts in the area. There are no burials to the south of the Colonial Park Wall.

Colonial Park during the Civil War

During the Civil War, Savannah was thankfully not destroyed like so many other cities in the South. While many cities in the path of Sherman's Army were burned to the ground, Savannah was spared from such widespread destruction. However, Colonial Park Cemetery still bears a few scars from the time of occupation. When the Union Army was camped out in Savannah, they used Colonial Park Cemetery as a camping area. Back then there was no fence around the Cemetery, it was wide open. While in camp a few of these soldiers had a mischievous sense of humor. On a few headstones throughout Colonial Park Cemetery, you will find dates carved into the stone which are wrong. People lived for over 1,000 years. A son's father died when he was not even a teenager yet. Well, if the carvings are to be believed. Of course, it was these soldiers who simply had too much time on their hands.

When you are walking through Colonial Park Cemetery see if you can spot any of these vandalized headstones.

Getting to Colonial Park Cemetery

Colonial Park Cemetery is located on Abercorn Street at the intersection of Oglethorpe. There is plenty of on street parking in this area, however during the summer months or weekends it can be hard to find a parking spot. The best time to visit Colonial Park Cemetery is in the morning, right after the Cemetery opens. The crowds are much lighter, the temperature isn't soaring yet and it is easier to find a parking spot.