When visiting Savannah, it is almost inevitable that you'll end up visiting a few of Savannah's Squares, even while just walking around. However, we encourage you to visit as many of the Squares as you can. Each one is unique, full of history, and has a charm all of their own.

The History of Savannah's Squares

Way back in 1733, when General James Oglethorpe first placed boots upon the soil we know call Savannah, he had a grand scheme for laying the city out in a manner which made sense, was easy to navigate and gave the citizens of this new city places to do things out in public. So, General Oglethorpe came up with the idea of laying the city of Savannah out in a grid pattern with Squares, which are open areas made for public use, spaced out throughout this grid. These Squares were originally used to practice and drill for the militia, but today they are gathering places of beauty and history.

As locals, we find it soo relaxing to head to one of the Squares, listen to the music being played and drift away into a much simpler time. When you visit Savannah make sure you leave some time to explore the Squares of Savannah. There are 22 remaining today (there used to be 24).

Even as Savannah was being built, the city was built around Squares. These Squares became the backbone of modern day Savannah.

All of our Squares offer a glimpse back into the history of Savannah. Look at the houses and historic buildings, peek your head into one of the homes that offer a tour. It is all part of what makes Savannah great and you owe it to yourself to experience it.

Below are the 22 Squares in Savannah which remain. Simply find the Square you would like more information about and click!

Elbert and Liberty Squares were sacrificed to make progress in Savannah. Today, both are represented by only a fraction of their original space. Ellis Square was at one time paved over, however it has been restored and it is now one of the most popular Squares in Savannah. 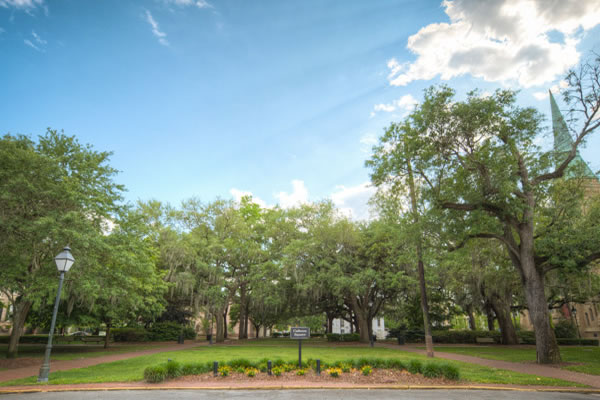 Calhoun Square is one of the more interesting Squares in Savannah. If you visit Calhoun Square you'll see many HIstoric Homes and Buildings that sit on the Square.

What is under your feet may creep you out most of all. Calhoun Square is the location for an old cemetery. Whether this was a slave cemetery, as rumored, or a Potters Field, it is interesting none-the-less. 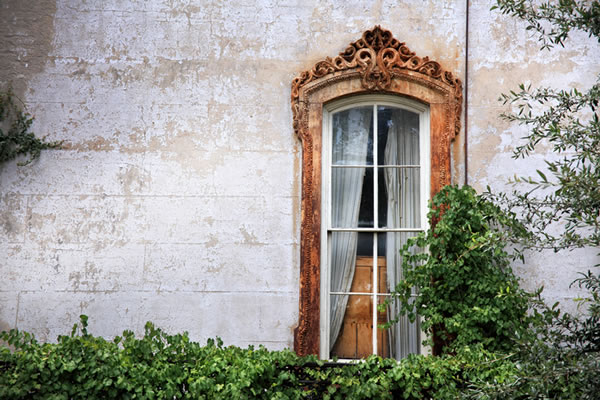 Chatham Square is one of the out of the way Squares that not a lot of people, aside from locals, get to. This makes it a perfect place to go and relax after exploring Historic Savannah.

You won't find any monuments or statues in Chatham Square but you will find relaxing shade and beautiful live oak trees. 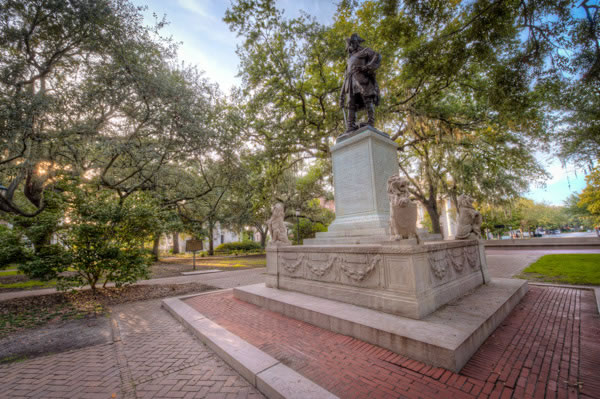 Chippewa Square is one of the most visited Squares in all of Savannah. Once you are there it will be easy to see why. Surrounding Chippewa Square are many Historic Buildings including the Savannah Theatre.

In the center of Chippewa Square you'll find the monument to General James Oglethorpe. And yes, Chippewa Square is the Square where Forrest Gump sat on the bench and waited for his bus. 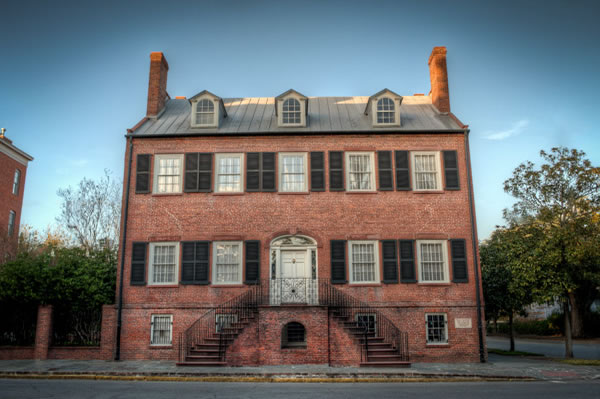 In the center of Columbia Square you'll find the Wormsloe Fountain. While not nearly as large as its famous counterpart in Forsyth, it is certainly worth the visit. 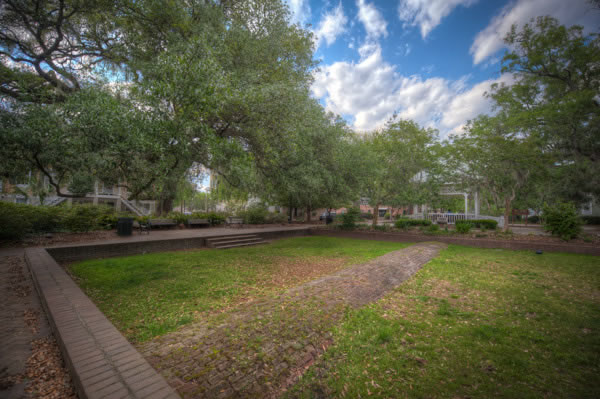 Crawford Square is probably the least visited..and least interesting Squares in Savannah. Hey, they cannot all be historic and exciting.

Locals spend a nice chunk of time in Crawford Square playing pickup basketball games. if you're on a quest to visit all of Savannah's Squares while visiting our city make sure you make a few minute stop to Crawford Square. 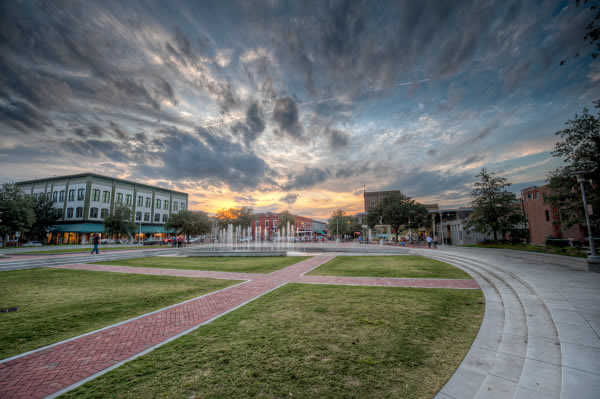 Ellis Square is one of the centers of activity in Savannah's Historic District. On any given day you can find tourists milling about, their children playing in the fountain which is located in Ellis Square. 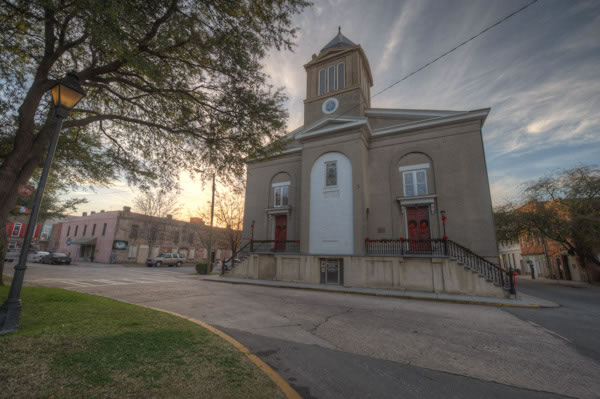 Located on the opposite side of City market from Ellis Square, Franklin Square is a bustling Square with many people passing through. Vinnie-Van-Go-Go's...Savannah best pizza joint sits on Franklin Square.

The real building worth visiting on Franklin Square is the First African Baptist Church, one of the best historic buildings in Savannah to visit. It is amazing!

Greene Square is one of the least visited Squares in Savannah. However, this doesn't mean it doesn't deserve a visit while you're here in Savannah. You won't find any monuments here but there are a few unique houses that sit on Green Square. 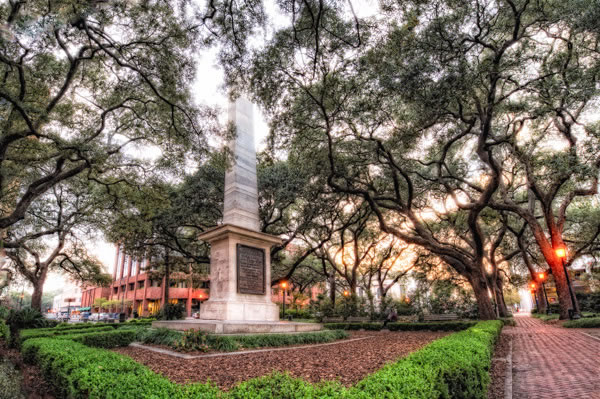 The first Square to be laid out in Savannah, all the way back in 1733, Johnson Square is a must visit locations for anyone who is visiting Savannah Georgia.

Located in the center you'll find the Nathanael Greene Monument. The General is buried underneath the monument. You'll also find some interesting fountains and the First Christ Church on Johnson Square. Almost everyone who comes to Savannah passes through Johnson Square at some point. 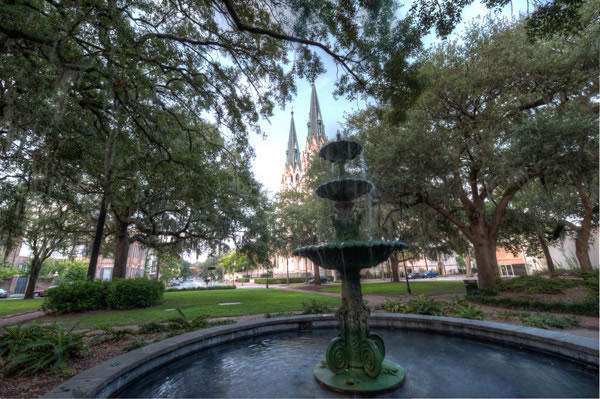 Lafayette Square is one of our tourists' favorite Squares in Savannah. And for good reason. Not only is the Cathedral of St. John the Baptist on Lafayette Square but so is the Andrew Low House and the Hamilton Turner Inn.

In the middle of Lafayette Square sits a fountain which is a wonderful relaxing spot while exploring the Historic District of Savannah Georgia. 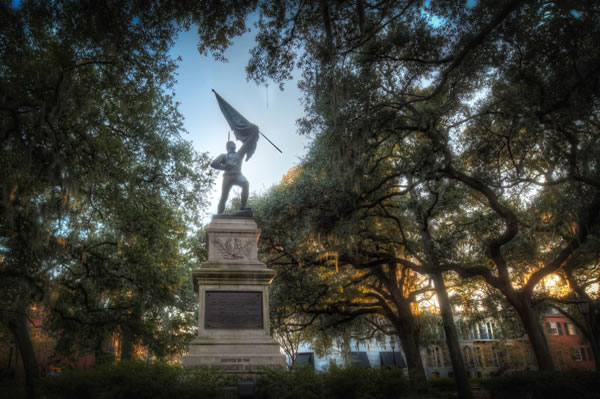 Madison Square has an interesting, and sometimes bloody, history in Savannah Georgia. This Square was one of the locations of fighting during the Battle of Savannah, during the Revolutionary War.

Today you'll find historic homes like the Green-Meldrim House and the Sorrel Weed House on Madison Square. When walking around Savannah, you have to check out Madison Square. Don't skip it, you'll regret it! 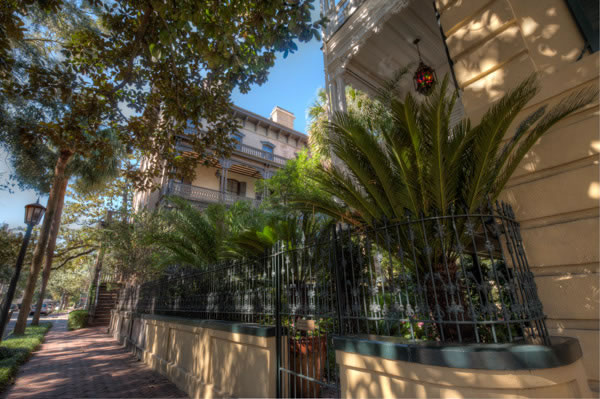 Monterey Square is the furthest south Square in Savannah, on Bull Street. You'll almost certainly pass through it on your way to visit Forsyth Park. One of the most visited Houses in all of Savannah sits on Monterey Square.

The Mercer-Williams House, featured in Midnight in the Garden of Good and Evil, operates house tours and is a popular stop for anyone who has read 'The Book'. 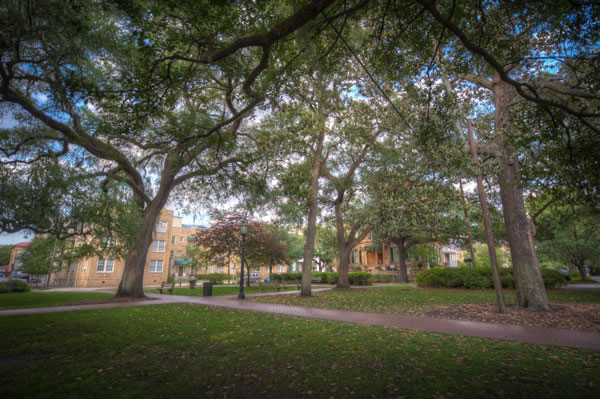 On Oglethorpe Square you'll find the Owens-Thomas House. This House should be visited by anyone who wants to tour a HIstoric Home in Savannah. It is a top-notch experience all of the way. 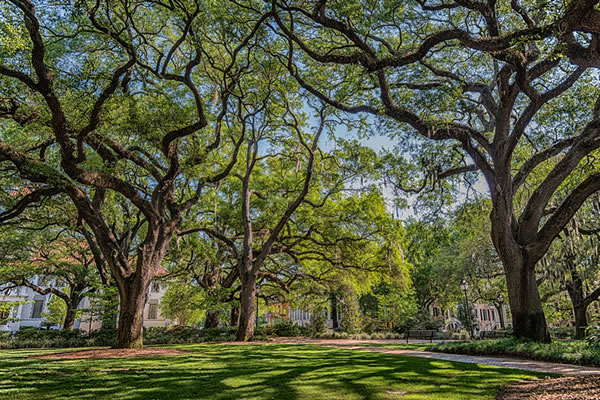 Pulaski Square, was named after Count Casimir Pulaski, who died during the Battle of Savannah during the Revolutionary War. It is a quiet Square located on the West side of the Historic District.

Many of the Homes and buildings on Pulaski Square are antebellum in origin. While it may not be the flashiest or most visited Square in Savannah Georgia it is certainly worth a visit. 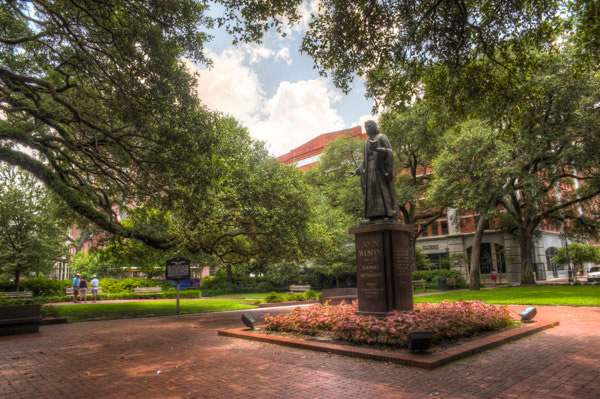 Reynolds Square, the Square closest to the Savannah River, on Abercorn Street, is one of the most beautiful Squares in all of Savannah. While the buildings of today's Reynolds Squares may not all be historic, the few that are there, are.

Probably best known for being the Square on which the Ol' Pink House Restaurant is located on, Reynolds Squares offers much more, including some of the best live oak trees in Savannah. 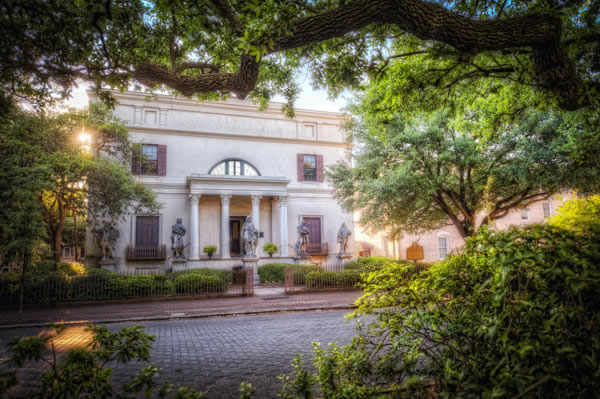 One of the original Squares in Savannah, Telfair Square, previously known as Percival Square is a must visit Square while in Savannah.

The Telfair Academy is located on Telfair Square. Once a mansion for one of the most influential families in Savannah's history, today it is an Art Museum. However, there are many more reasons than that to visit Telfair Square. 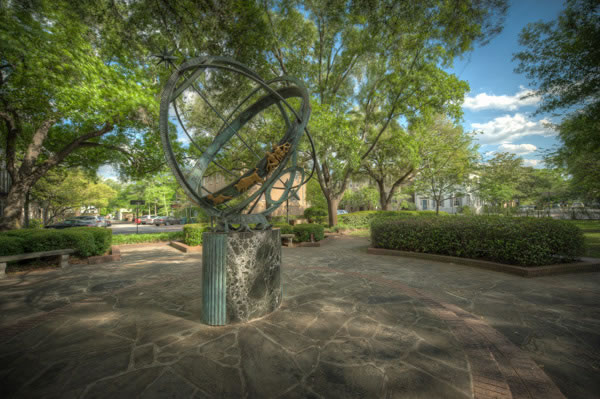 Troup Square, is an interesting Square on the east side of Savannah's Historic District. You'll find many historic and antebellum houses while visiting Troup Square.

In the center of Troup Square is one of the more interesting monuments to be found in Savannah's Squares, the Armillary Sphere. 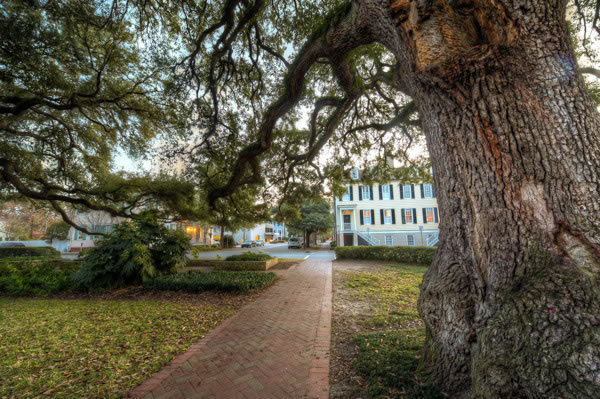 Warren Square is one of the smaller Squares in Savannah. It has beautiful Live Oak trees throughout the Square. You can even find more than a few Historic Homes on Warren Square.

It isn't the most exciting Square to visit in Savannah but it is a favorite of locals for the relative peace and quiet in the Square. 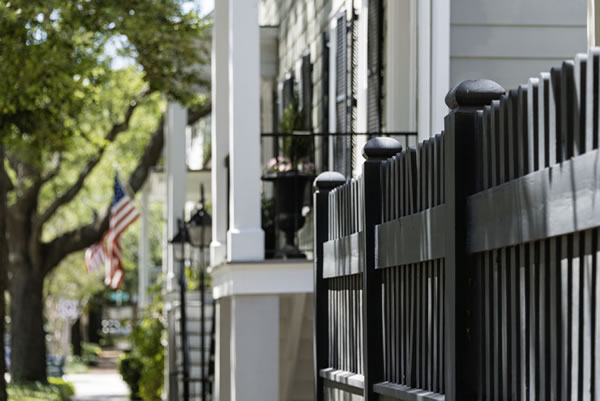 Washington Square, named after George Washington, was laid out in 1790. Today, you'll find a quiet, beautifully landscaped Square with a few benches for relaxing. The locals who live in this area are found of gathering in the Square for wine once a week.

If you go back in Savannah's history you wouldn't find the same scene in Washington Square. It use to be in the neighborhood or lower income, working class individuals. 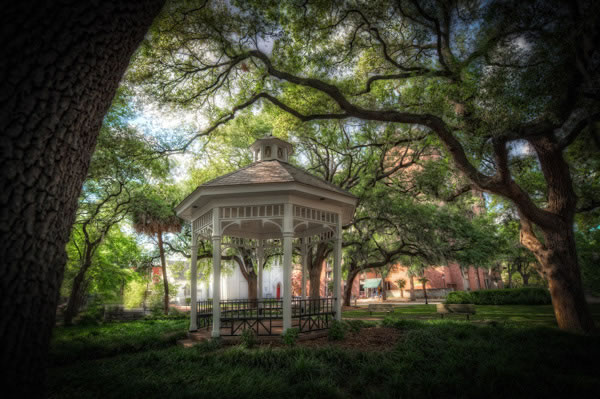 Sitting in the center of Whitefield Square you'll find a gorgeous gazebo sitting underneath some large, shade providing oak trees. It truly is a gorgeous site.

If you are in Savannah during the summer it isn't uncommon to see wedding ceremonies taking place underneath the Gazebo in Whitefield Square. 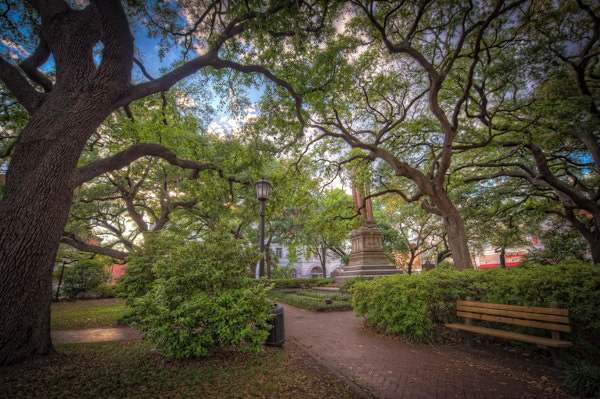 Wright Square certainly has an interesting place in Savannah's history. One of the first four Squares to be laid out, Wright Square was the site of the original courthouse and jail in Savannah.

There are even rumors that Wright Square was the location of the first gallows in Savannah. A few noted authorities on Savannah's history have challenged this notion but not to a factual degree. Regardless, you cannot come to Savannah and not see Wright Square.

Do you want to learn more about Savannah's history?

Gallivanter offers the widest variety of top-rated tours for those who appreciate the history of our beautiful city.