If you’re visiting Savannah’s Historic District, you’re sure to see the Oglethorpe Monument! Dedicated in 1910, this 9-foot statue stands at the center of Chippewa Square in commemoration of James Oglethorpe, founder of the Colony of Georgia. Oglethorpe’s Monument is an impressive addition to the Square: Oglethorpe is cast in bronze, commanding attention atop a marble pedestal. Oglethorpe Monument is more than a striking sight, however. The marker memorializes the city’s collaboration and construction. From criminals to near-death collisions, the establishment of the Oglethorpe Monument makes it an essential stopover.

Like other Englishmen of the upper class, Oglethorpe briefly attended Oxford. Yet Oglethorpe abandoned his studies to enlist in the militia, becoming the personal assistant, or “aide-de-camp,” to the Prince Eugene of Savoy.

Oglethorpe later became interested in penal reform and transitioned into politics.He was especially attentive to debtors’ prison, preoccupying himself with their reentry into society. Debtors were being released from prison without the means of support. Without resources, releasees were forced into criminal activity.

To ease their transition, Oglethorpe proposed the Colony of Georgia. If indebted prisoners were sent to the British colonies, British cities would be alleviated. Their relocation would likewise allow them to become self-sufficient citizens while providing a barrier between the British Colony of Carolina and Spanish Florida.

Oglethorpe furthered his cause in 1731 by forming the Trustees for the Establishment of the Colony of Georgia in America. By 1732, Oglethorpe’s charter was granted.

Oglethorpe and the City of Savannah

Oglethorpe arrived at Savannah in 1733. His vision didn’t quite come to fruition, however. Few debtors were sent to Georgia. The colony was instead populated by refugees and tradesmen.

Upon his arrival, Oglethorpe enlisted the help of Yamacraw Chief Tomochichi. Together, Oglethorpe and Tomochichi negotiated the treaty that would provide the land for Savannah. Tomochichi likewise mediated affairs between the native population and the colonists, providing critical assistance to Oglethorpe.

Yet Oglethorpe’s oversight was not without controversy: Oglethorpe had banned slavery in Savannah, thinking that runaway slaves would bolster Oglethorpe’s enemies at St. Augustine, Florida. Oglethorpe was thereby declared a “perpetual dictator,” and pro-slavery settlers relocated to South Carolina. Slavery was later permitted in Savannah upon Oglethorpe’s departure.

Despite Oglethorpe’s overall success, his stay in Savannah was short-lived. He returned to England in 1743, where he continued his military career until his retirement. Oglethorpe died at Cranham in 1785. He was buried near London at the Parish Church of All Saints’ Cranham. His contributions to Savannah are, to this day, invaluable.

While the association itself only accumulated $5,000, they were able to campaign for an additional $33,000. The State of Georgia, for example, contributed a remarkable $15,000! The remaining funding was collected through city coffers and private donations.

Each of Bull Street squares features a notable figure in Savannah’s history, yet the Oglethorpe Monument was the last of the major monuments to be placed.

The Oglethorpe Monument was designed by Daniel Chester French, the prolific and highly acclaimed architect. Yet French did not work alone, and was instead commissioned alongside Henry Bacon. French had collaborated with Bacon previously for the Lincoln Memorial of the United States Capitol, making them a desirable and well-respected team. French designed the figure of Oglethorpe while Bacon designed the pedestal and base of the monument.

The Oglethorpe Monument was erected in 1910 by the State of Georgia, the City of Savannah, and patriotic associations such as the Colonial Dames and the Daughters of the American Revolution.

The installation of the Oglethorpe Monument was remarkably perilous. During the establishment of the monument, a construction crane snapped and crashed to the ground. Several workers were almost killed in the collision! No one was injured, however. The monument itself was only narrowly avoided. The collision missed Oglethorpe by a matter of inches.

Joseph M. Brown, Governor of Georgia, officially unveiled the Oglethorpe Monument on November 23, 1910. Three days were devoted to Oglethorpe’s commemoration; addresses were given on Oglethorpe’s biography and accomplishments. Yet the celebration didn’t stop there. Additional festivities included sporting competitions and cavalry displays. A parade was even held in Forsyth Park.

The festivities came to an end on November 25. A mock battle was staged with the Coast Artillery Corps against the Seventeenth Infantry and Eleventh Cavalry, closing the commemoration. Talk about going out with a bang!

As for the monument, Oglethorpe is attired in the uniform of a British General. He draws his sword while a palmetto frond lies at his feet. Customarily, Oglethorpe faces southward – indicating Spain’s threat to the Colony of Georgia.

The pedestal is flanked by four lions who bear, respectively, the Coat of Arms of Oglethorpe, the Colony of Georgia, the State of Georgia, and the City of Savannah. An excerpt from the Charter of 1732 is carved upon the pedestal, reading "the Trustees for establishing the colony of Georgia in America." Stone benches appear on either side of the monument, reflecting the Italian Renaissance style. The monument is a striking sight. 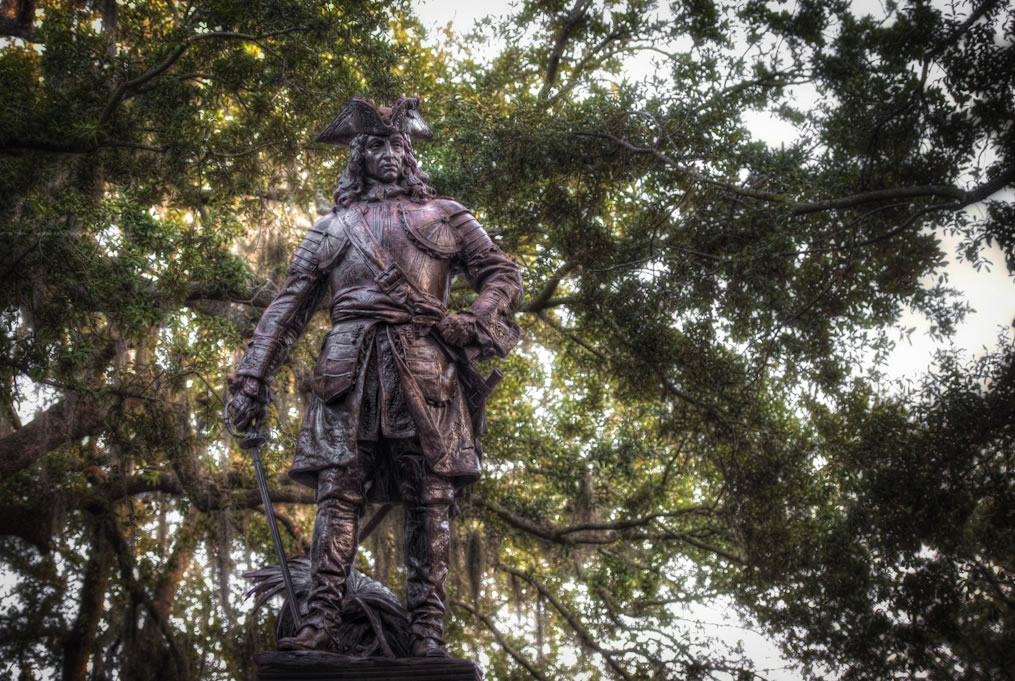 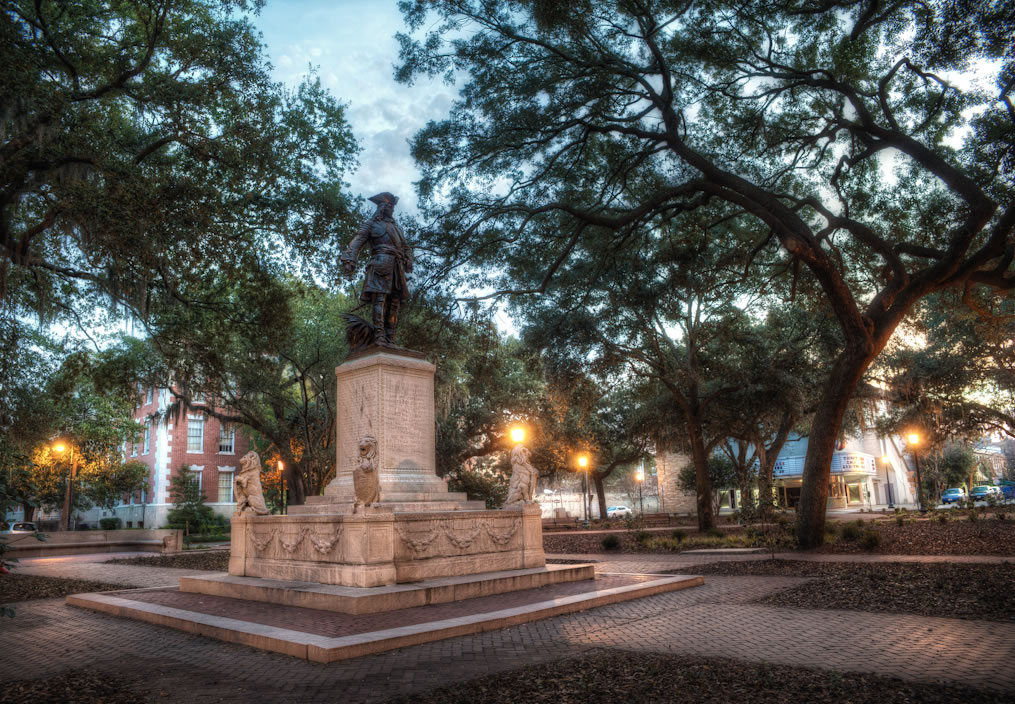 Where is the Oglethorpe Monument?

Visitors to Chippewa Square will also find the Savannah Theatre, the First Baptist Church, and the Philbrick-Eastman House. Chippewa Square is also known for the iconic opening to Hollywood’s Forrest Gump! You’re sure to enjoy this historic site.