River Street is one of the most popular places for tourists to visit in Savannah. Not only are there great restaurants and shops on RIver Street, it is filled with history.

Looking to learn about the City of Savannah? Take a stroll down River Street! This iconic waterfront features over seventy shops and twenty-one restaurants, making it a hotspot for sightseers. Yet this historic roadway once drove much of Savannah’s commerce. Savannah’s Cotton Industry, for example, relied upon River Street for the import and export of material.

Relics of “King Cotton” are still present there today, as are artifacts from the Revolutionary and Civil Wars. You’ll even encounter oddities and curiosities, like Savannah’s “Waving Girl Statue” and Cluskey Vaults! Don’t forget to stop by Emmet Park if you’d like to relax. Emmet’s soothing shades are exceptionally serene.

Visit River Street to immerse yourself in the sights and stories of Savannah!

The History of River Street

River Street’s history dates back to the City of Savannah itself. Founded by General James Oglethorpe in 1733, Savannah began as a Royal Colony. Yet Savannah was also a major shipping harbor, specializing in the export of silk and indigo. It wasn’t until cotton was introduced, however, that the Port of Savannah became one of the most active in the United States.

That’s where River Street comes in… With access to the Savannah River, River Street ensured Savannah’s economic and commercial success. The Cotton Exchange was also located on River Street, making the roadway indispensable to Savannah’s prosperity.

Servitude and Slavery on River Street

While Savannah’s tragic tales are no secret, the history of River Street is particularly dark. Indentured servants were often forced into backbreaking labor along River Street, leading to their untimely deaths. River Street’s warehouses were even used as holding cells for slaves. These cells, or “barracoons,” still stand today, though they’ve since been repurposed.

If you’ve strolled down River Street, chances are you’ve noticed the cobblestone. But did you know that the cobblestone was once used as sailing ballast? The stone was collected from eighteenth-century ships that entered Savannah’s harbor. Ships would often leave ballast behind, allowing citizens to collect and reuse the material. The stone contained chert, granite, quartz, and basal, making it a durable yet inexpensive resource. One man’s rubbish is another man’s roadway! 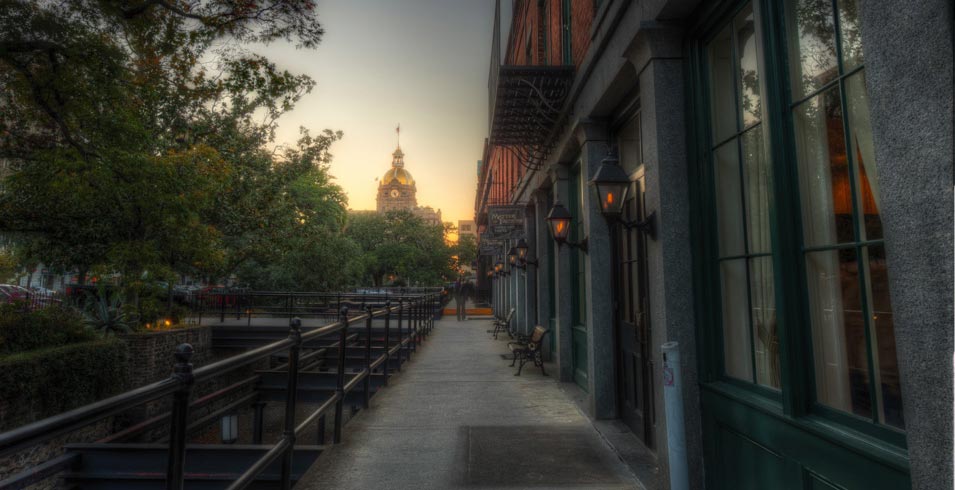 Although Factor’s Walk is often overlooked, this was once the site of Savannah’s Cotton Exchange. Named for Savannah’s brokers or “factors,” Factor’s Walk was Savannah’s commercial center during the nineteenth century. Cotton warehouses were particularly prominent along Factor’s Walk.

Factor’s Walk has changed a lot since the nineteenth century, however. Today you’ll find tourist shops, museums, restaurants, and the River Street Inn. You’ll also find Savannah’s enigmatic tunnel system, though the tunnels are inaccessible to the public. Slaves were also transported through Factor’s Walk, leading some to suspect that it’s haunted. 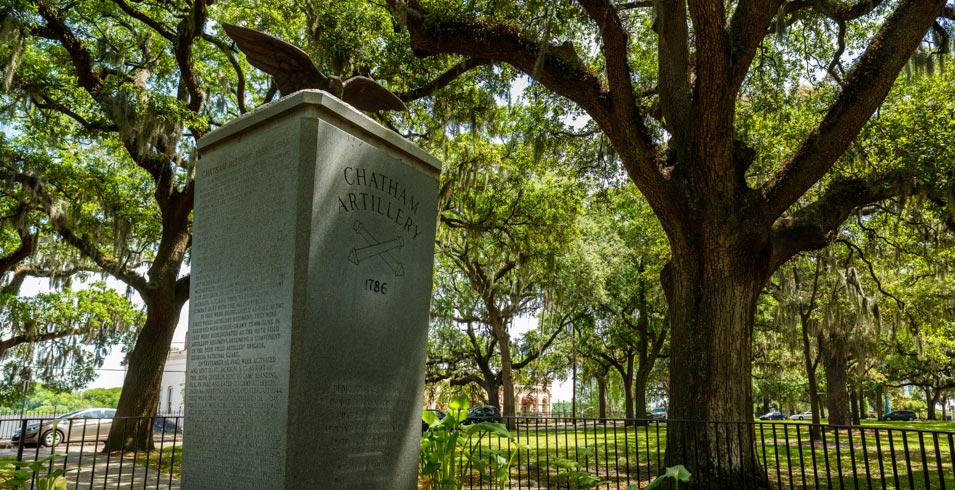 This small but significant park was once the center of Savannah’s Irish-American community. Irish laborers would often live in the park’s southern ward, allowing their families to enjoy the ample shade and scenery. Although Emmet Park was formally dedicated after Robert Emmet in 1902, Emmet Park was once known as “Irish Green.”

The Cluskey Vaults of Factor’s Walk are, no doubt, remarkable. Yet the purpose of these catacomb-like enclosures was only recently unearthed. While scholars once thought the vaults were used to transport slaves, excavations reveal that they were used for Union Soldiers. Artifacts such as pans, buttons, and wine bottles were even exhumed!

Now the Masonic Lodge, this iconic red building was once the Cotton Exchange. Completed in 1887, the Cotton Exchange was one of the most significant sites in Savannah! The facility was designed by William Gibbons Preston, whose composition won against eleven other architects. Savannah was the largest cotton exporter on the Atlantic at the time and transported over two million bales a year.

The Inn’s architecture, too, reflects its industrious past. Wide, arched doorways illustrate how space was constructed to accommodate larger bales of cotton. Floor-to-ceiling windows were installed to compensate for the facility’s former lack of electricity.

The building was redeveloped in 1987, and 55 guest rooms were added. The warehouse then became the 99-room River Street Inn. 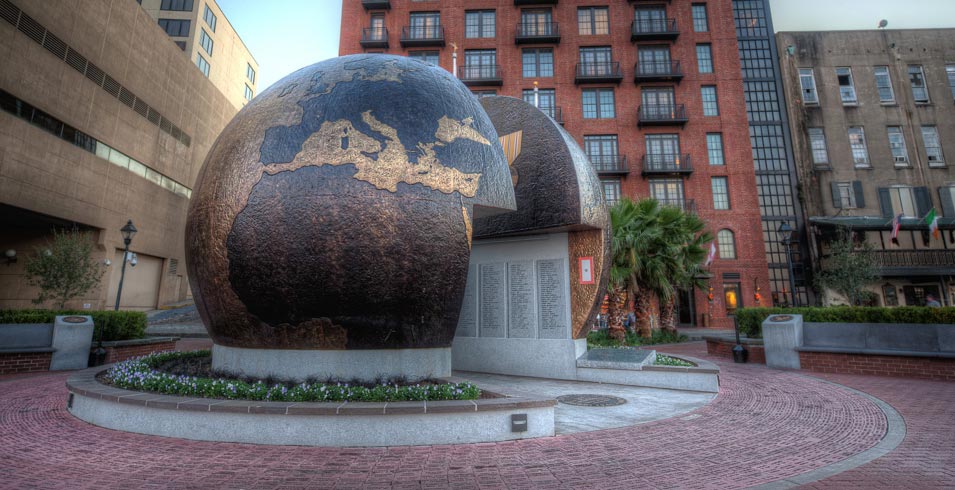 Also known as “A World Apart,” and “Cracked Earth Monument,” River Street’s World War II Monument commemorates the Chatham County veterans of the Second World War. The memorial was erected by the Veterans Council of Chatham County and the City of Savannah in 2010 and reveals a split globe symbolizing the European and Pacific Theaters of War.

Visitors may walk between the halves of the globe to read the monument’s inscription. The inscription lists the names of 527 Chatham County veterans; visitors will also find a larger-than-life Purple Heart. The monument was designed by Eric Meyerhoff and constructed by Ken Brandell.

This unique monument pays tribute to Florence Martus, the daughter of an ordnance sergeant at Fort Pulaski. Between 1887 and 1931, Martus, or Savannah’s “Waving Girl,” would greet ships at the harbor. She would often wave to them with a white handkerchief and lantern. Some say that she never missed a ship.

No one knows why Martus took up this pleasant though unusual pastime… Some suspect that Martus was lonely. Others suspect that she was waiting for a sailor lost at sea. We’re not sure if this is true, but it makes for a good story! You can find Savannah’s “Waving Girl” at the east end of River Street. Martus is depicted with her handkerchief and collie, both immortalized in bronze.

Although the Old Harbor Light was closed during the Second World War, it has since been restored. Twice, actually!

At 11-feet tall, the African-American Monument is sure to catch the eye. The monument, which depicts a family in an embrace above the chain of slavery, canonizes Savannah’s African-American history. It also pays tribute to Savannah’s black citizens, memorializing their contributions to the city’s economy and culture.

The monument’s designer, Dorothy Spradley of the Savannah College Art and Design, wanted to additionally recognize Savannah’s former slave presence. Spradley emphasized this through the monument’s inscription, which she selected from Maya Angelou. Although the African-American Monument was unveiled in 2002, the City of Savannah didn’t publicly acknowledge their participation in slavery until 2007.

Erected in 1976, Savannah’s Anchor Monument commemorates merchant sailors lost at sea. An anchor and chain are situated within a reflective pool. The marker was founded by Margaret Campbell, coordinator of the Savannah Chapter of the Women's Propeller Club.

You can find Washington’s Guns to the right of City Hall. They’re next to the Upper Factor’s Walk, so be sure to stop by.

River Street’s most popular attractions are located between Martin Luther King Boulevard and East Broad Street. Parking can be found nearby, but we suggest taking a Lyft or Uber for ease.

Whatever your interest, Savannah’s River Street is sure to catch your eye! From the Revolutionary War to the River Street Inn, we think there’s something here for everyone.