Almost certainly, the burial spot of Little Gracie, as she is affectionately known as, is the most visited spot within Bonaventure Cemetery

One of the most visited grave sites in Bonaventure Cemetery is that of 'Little Gracie'. Her story has captivated visitors to Bonaventure Cemetery for over 100 years. The wrought iron fence surrounding her grave site is often adorned with little gifts left by people who were touched by the story of Little Gracie. After all, she died at a young age and was left behind in Savannah, all alone after her death. 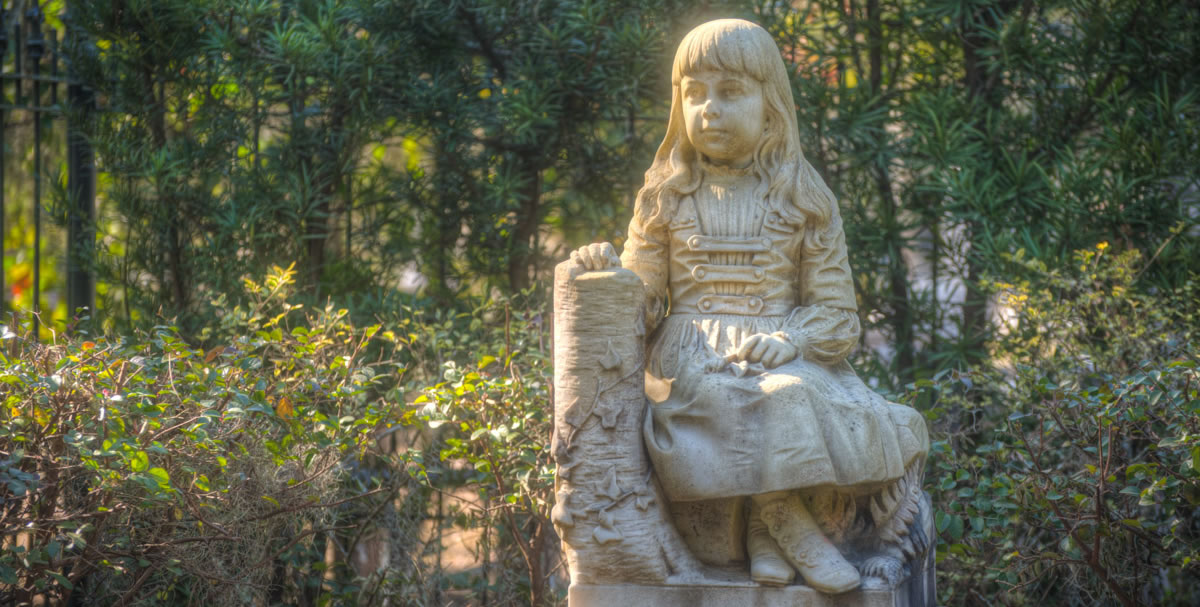 Gracie Watson was born in 1883 to W.J. and Frances Watson. The Watson family was originally from Boston Massachusetts. They made their way to Savannah after W.J. was hired to manage the Pulaski Hotel. This luxurious hotel, which was located at the corner of Bull Street and Bryan Street, was one of the best hotels in all of the south. Managing the hotel was a prestigious position. While working at the Hotel his daughter, Gracie Watson, became quite the center of attention. This bright-eyed girl warmed the hearts and brought smiles to the faces of almost every visitors to the Pulaski Hotel. It is said she would put on little shows for the guests, dancing in the lobby and singing songs. Any of us with young children could certainly relate to this!

In 1889, just two days before Easter Gracie Watson would pass on. She suffered from pneumonia and finally, her little body couldn't take any more. Savannah was heart-broken. Her parents were far beyond heart-broken. Her father fell into a deep depression after Gracie's death. She was laid to rest on the Watson family plot in Bonaventure Cemetery. As a tribute to his beautiful little girl, Gracie's father had sculpture John Walz carve a monument to his girl. Using a photograph as reference John Walz sculpted the monument which now sits upon Little Gracie's grave site out at Bonaventure Cemetery. It is said to be life size and a picture-perfect representation of Little Gracie Watson. This hauntingly beautiful monument to Little Gracie has captivated visitors to her grave site for over 100 years.

Perhaps the most heartbreaking part of the story is the Gracie is here all alone. After her death, her father quit his job managing the Pulaski Hotel. He took a job working at the Desoto Hotel. However, that didn't last too long. Eventually, he and Frances moved back to New England, leaving Gracie all alone in Savannah. After their deaths, Gracie's parents were buried in New England. Is this part of the reason why Little Gracie's gravesite is such a popular place to visit in Bonaventure? It would only be human of us to want to comfort the young girl, to keep her company, even after death. Perhaps we feel a need to keep her spirit from getting lonely, even though she is buried over 1000 miles from the only family she ever knew.

The Ghost of Little Gracie

Even after death, Gracie has remained an ambassador for Savannah. It seems that the spirit of Little Gracie Watson is still around. Many people have reported seeing the ghost of a little girl playing in Johnson Square, the Square that the Pulaski Hotel was built on. Some of the people who have seen this ghost have said that they believe the ghost to be a real girl, with a pretty white dress, running around Johnson Square, just as you would imagine any child to do....until she disappeared into thin air. I personally have never seen the ghost of Gracie Watson or talked to anyone to hear a first-hand account of them seeing her. Is her ghost really seen in Johnson Square? Or are these simply reports from people who had overactive imaginations? I guess I will have to spend some more time sitting in Johnson Square late at night to see if I can see her for myself.

On your next trip to Savannah make sure you find a few hours to make it out to Bonaventure Cemetery. It is located on Bonaventure Road, about 10 minutes from the historic district of Savannah. Once in the Cemetery, you can use their computerized grave finder at the visitor's house to find Little Gracie's gravesite. You may even want to bring a little toy or stuffed animal to leave behind.